I came late to Alternative History as a genre. There are two reasons for this. First, one of the most-well-known writers in the genre is Harry Turtledove, and I was never interested in his premise/beginning of the Civil War. For all I’m fascinated with so many periods in history, the American Civil War has never done anything for me. 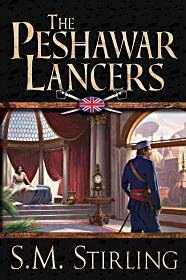 So, I kind of just put alternative history on the back burner. What brought me back to it was a Steve Stirling novel, The Peshawar Lancers. That’s a story for another post, though.

It started in high school

When I was a kid, I read a lot of juvie SF, most notably the Tom Swift books. I shifted to historical fiction when one of my dad’s friends, a librarian, suggested Hornblower to me. Then I got back to SF via an English class at Brother Martin. This was 1974, and the Cold War weighed heavily on everyone. American involvement in Vietnam was coming to an end, shifting the nightly news from the war and Nixon to re-focus on the bigger picture, potential conflict in Europe between the Soviet Bloc and NATO. Stories with a post-nuclear apocalypse theme were just depressing. Off I went into escape! On the teevee, that mean Star Trek, naturally, with Star Wars not far behind. Mr. Tony Hartigan’s English class got us wound up on Asimov, Heinlein, and Clarke. I was home! No dwelling on tactical nuclear weapons in West Germany. No thoughts on a “winnable nuclear war”. Stories like this one from Dick just didn’t fit my frame of mind. The US losing WWII and is partitioned between Japan and Germany? That was just too fucked up for me.

Then my 21yo called a few weeks back, asking if I’d ever read this novel. The reason, of course, was because Amazon was about to drop a teevee series based on the story.