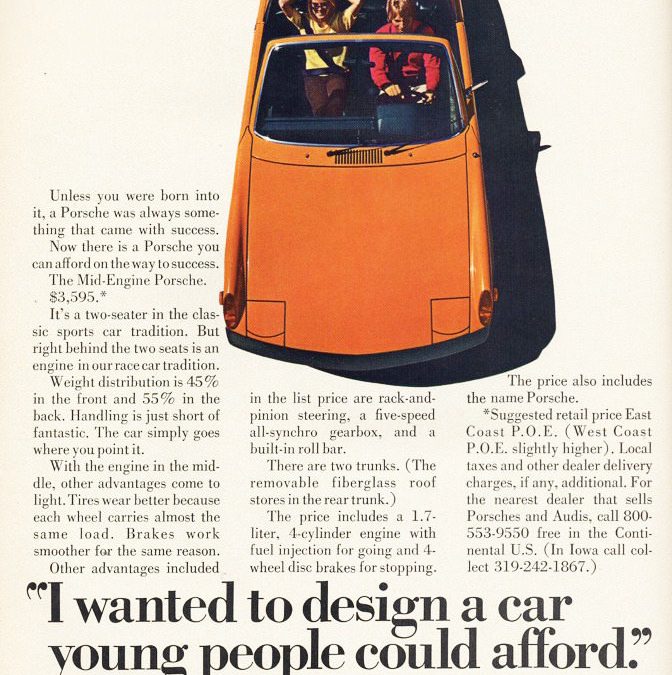 Fr. Michael O’Donnell drives a Porsche 914 in the Talents Universe. Porsche introduced the 914 model in 1969. The automaker partnered with Volkswagen on the 914. Porsche wanted an upgrade/update to their model 912. Volkswagen wanted something new to replace their Karmann Ghia. Production of the 914 ran from its introduction until 1976. Volkswagen introduced their Karmann Ghia coupe in 1955. They sought an update by the late 1960s. While their partnership with Porsche produced the 914 in 1969, Volkswagen continued production of the Karmann Ghia through 1974. Therefore, VW had (sort of) two coups in the 1970s

I never rode in a Karmann Ghia, but my dad owned one for a brief time before I was born. So, he would see them go by later on and express his fondness for the sports car of his younger days. By the time I attended university, the Karmann Ghias were old news. They appealed to guys with an interest in older cars, but my friends with 2-seat sports cars opted for the Porsche, or the MGB. One friend even drove an Alfa Romeo

I had two direct encounters with the Porsche 914. The first was in my second and third years as an undergrad at University of New Orleans. A Student Government Association friend owned one. It was a fun little car. The center engine design took a bit of getting used to. As a kid, I found my dad’s rear-engine Beetle a curiosity. The vibration of the center-engine gave the 914 a different feel.

My second 914 encounter was as a student teacher in my fourth year at UNO. My supervising teacher at F. W. Gregory Junior High drove a Porsche 914. While I never got to drive either of those cars, the design, and the fun of riding in my friend’s car stayed with me.

After UNO, I bought a 1980 Plymouth Horizon, to get me to and from Redeemer High School. By all accounts, the Volkswagen transmission in that car behaved much like that of the Porsche 914.

Mike O’Donnell is a History professor. So, he naturally has an appreciation for older automobiles. While not an auto-repair type himself, Mike picked up the basic skills one needs when one owns an old car. He learned early on in his ownership of a 914 to network with people who can fix your old car. Mike’s Porsche 914 is white in Hidden Talents and Trusted Talents.

This ad is from 1971. So, it’s a good representation of Mike’s car. I follow a number of folks on Tumblr who enjoy sharing older/vintage advertising. So, this one made me smile.