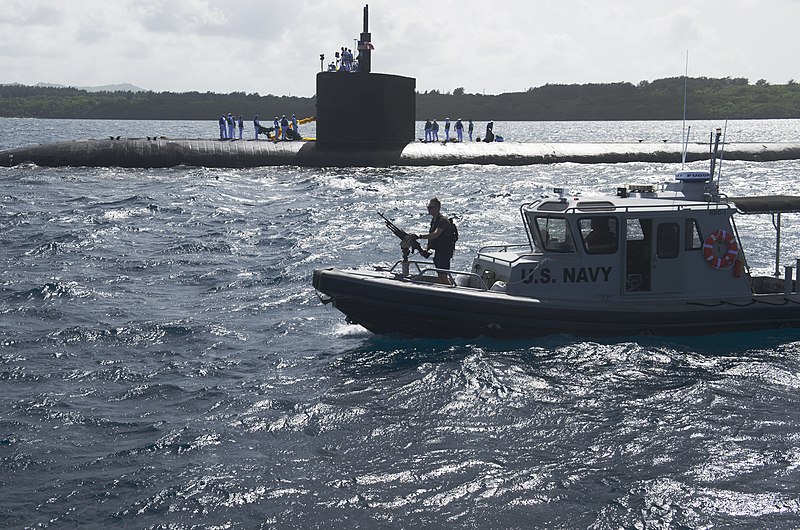 USS Topeka SSN-754 gets a new Navigator this week. LT Firstborn was home for the holidays, having completed the Submarine Officer Advanced Course (SOAC) at Naval Submarine Base New London. We brought him to the airport this morning, and he’s off to Naval Base Guam, which is the home port of the USS Topeka SSN-754. The Topeka is a Los Angeles-class fast-attack submarine. These submarines formed the backbone of the US Navy’s attack submarine force for the last forty years. While some of the 688s (as they’re known) were upgraded to extend their service lives, the USS Virginia-class boats phase them out. Insignia of the USS Topeka SSN-754 (US Navy drawing)

The USS Topeka SSN-754 entered service on 23-January-1988. That makes the boat six months older than LT Firstborn! The Lieutenant did his “junior officer” tour on the USS Alexandria SSN-757. So, it was logical for him to go back to sea on a 688. USS Topeka entering the harbor at Naval Base Guam, December, 2019. (US Navy photo)

LT Firstborn surprised me by choosing Naval Base Guam as his home port. He opted for that base over a position as Engineer. He had several reasons for this choice. Because Guam is so forward (in relation to Pearl Harbor or San Diego), the boats there go out for a few weeks and then return to port. The boats assigned to US ports often go out for as long as six months as a time. By choosing Guam, he gets to sleep in his apartment more often.

His other motivation for Guam is travel. Hopefully things will remain stable enough that he’ll be able to visit places like Tokyo, Bangkok, and other interesting Asian destinations.

The path to Guam So, LT Firstborn was commissioned as an Ensign (O-1), after completing OCS. He received promotion to Lt. Junior Grade (O-2) while in the various schools required of a submarine officer. As a LTJG, he served on the Alexandria. He received promotion to Lieutenant while on that boat. Then came his three-year “shore tour.” He served at NSA Saratoga Springs in upstate New York for two years. Then came a year at the US Army Command and General Staff College in Ft. Leavenworth, Kansas. Next came SOAC, to get him and other O-3s ready to return to the fleet as senor officers. Insignia for a Lieutenant (O-3), US Navy (Navy image)

Submarines such as the USS Topeka SSN-754 have a Captain and an Executive Officer, who hold the rank of Commander (O-5). Under them are three “department heads,” They command three departments, Engineering, Navigation, and Weapons. The Engineer is usually promoted to Lt. Commander (O-4) when assuming the job. The other two department heads are Lieutenants (O-3). They receive promotion during the tour. LT Firstborn joins Topeka as its Navigator. He’ll be responsible for 30-40 sailors, three or four Chiefs, and a couple of junior officers. He’ll be responsible for bringing the boat in and out of port, underway navigation, and ship’s communications. He will also stand watch as needed, as Officer of the Deck and as Engineering Duty Officer, as needed.

I am so proud of this young man! I do hope we’ll get to go out to Guam to visit. Better still, if the boat puts into Pearl Harbor at a time when we only have to go that far. It was so good to have him home for even a short time. Now I’m back to teaching and writing.