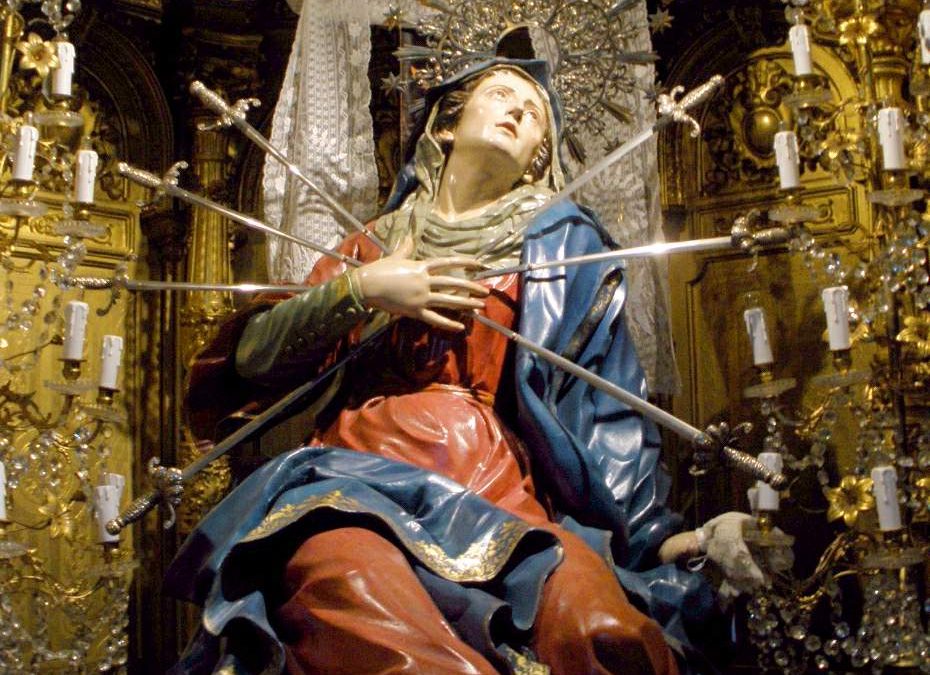 Timing mechanisms are useful for folks in many professions. Invoking the deity is quite common as well, particularly among military personnel in stressful situations. That’s why it wasn’t surprising to me when an ex-military character on “FBI Most Wanted” used “Mother of Sorrow” as a litany.

If you were raised in a religious household, you may know one or more litanies connected to your family’s faith. Catholics in particular are able to recite numerous parts of the Mass that they said over and over and over as children, weekly, if not more often. That’s why following the Star Wars line, “May the Force be with you,” with, “And with Your Spirit,” strikes the Catholic funny bone.

Then there’s the Rosary. While kids attending Catholic school don’t pray the rosary as often as older generations, those that did have it stuck in their heads forever. A Catholic child got their first rosary beads when they made their First Communion in second grade or so. They prayed a decade (ten Hail Marys) before class in many schools. Say the Hail Mary that often, well, you get the idea. The rosary has potential for numerous soldier litanies.

The most memorable example of using a religious litany as a timing mechanism is in the book/movie, “A Bridge Too Far.” In the push by the US 82nd Airborne Divison to take the Waal River Bridge at Nijemegen, Netherlands, then-Captain Julian Cook led an assault to the far side of the bridge by boat. To keep timing while paddling, he said, over and over, “Hail Mary, full of grace…” Soldier litanies help focus and keep those reciting them alive.

Prayer as timing assistant happens to this day.

One of the ways folks pray the rosary is to reflect on the “Mysteries” of Mary, Joyful, Sorrowful, and Glorious. They’re a great way to take a long, meditative prayer even longer. So, when a former Army sniper with mental health issues invoked “Mother of Sorrows” on the FBI show, it wasn’t a big surprise. He repeats “Mother of Sorrow” over and over, while loading rounds into a magazine. It’s a particularly dark reference. While non-religious and/or non-Catholic folks may roll their eyes, if you recited the rosary as a kid, it’s less odd than you think.

Of course, it doesn’t fit for a guy loading up a weapon of human destruction to reference the Joyful or Glorious items. Sorrows strike the dark chord. I got it immediately, but my memories of this particular visualization of Mary was fuzzy. I was always more of a positive/happy Catholic than a suffering Catholic. So, I needed to look back on Our Lady of Sorrows. This image is the first thing that hits you on Wikipedia: This is “Seven Swords Piercing the Sorrowful Heart of Mary” in the Church of the Holy Cross, Salamanca, Spain. It’s a particularly violent and dark image. When you stop and think about it, though, it’s reflective of the grief of a mother. Four of the seven sorrowful mysteries touch upon the Crucifixion of Christ, from his mother’s perspective. Women will tell you, many would rather suffer and die than see their children come to harm. All of a sudden, an incredibly violent statue of a woman being pierced by swords hits home.

I’m not sure how this will all fit into a story, but it may well. Catholic themes pop up at odd times for me as a writer.