Yuletide Gifts – my boys get me 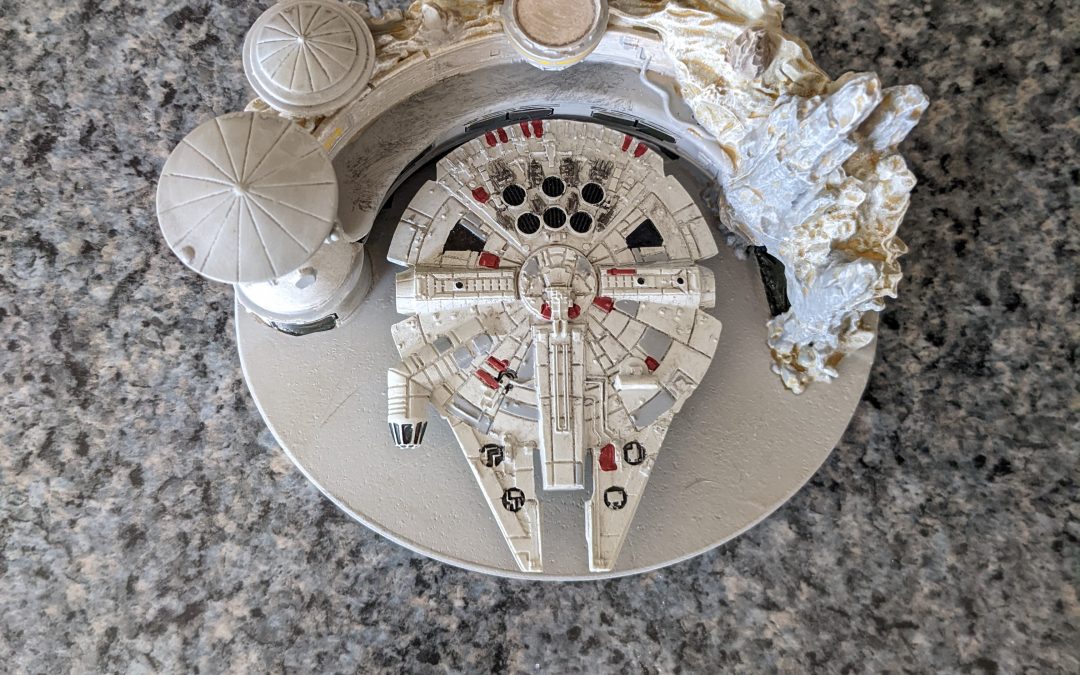 Yuletide gifts from my boys show that they understand how I think. The Black Spire statue from Galaxy’s Edge at WDW

My boys (LT Firstborn, USN, Ret, age 33, and CPA Kiddo, age 27) get my reading and fandom interests. Just like kids know their parents’ musical tastes because they heard it so much in the car or in the house, my boys know a lot about Lord of the Rings (LotR), Star Trek, and, naturally, Star Wars. They both consider themselves Star Wars fans over Star Trek. The Firstborn is the serious LotR geek. Both of them are Potter kids, and that’s their fandom. The bottom of the Black Spire statue from Galaxy’s Edge

So, just before Yuletide, they made a Grand Tour of the theme parks in Orlando. While Kiddo is married, Dr. Branley is in the midst of her first year of Pediatrics residency. So, she didn’t mind terribly if her husband went off for a week. The boys explored just about everything from the Kennedy Space Center to Sea World to Univresal and The Mouse. They even drove over to Busch Gardens in Tampa, being the roller coaster kids they are.

Since Star Wars is one of their things, naturally they did everything there is to do in Galaxy’s Edge at Disney. Of course, they passed through the gift shops, where they encountered the “Black Spire Outpost” statue. What/where is “Black Spire?” From the Wookieepedia:

Black Spire Outpost, commonly known as Black Spire, was an outpost on the planet Batuu on the edge of the Outer Rim Territories. It was one of the last stops before Wild Space and the Unknown Regions. The outpost was named for the giant black trees that towered it.

It’s cool. I’m not up on the canon surrounding Galaxy’s Edge, but I love this spaceship hanger. Minas Tirith, the Tower of Guard. Statue from the deluxe box DVD set of the movie, “The Return of the King”

I’m a miniatures person. Messing around with 15mm Napoleonics, LotR, and Traveller RPG miniatures brings me joy. I’ve attempted to paint 54mm figures at various points. N Scale model railroading is a passion. So, the boys bring me home a miniature Millennium Falcon? I’m there. It’s just another part of the passion. The “secret compartment” in the Minas Tirith statue

But there’s more to the story. Back in 2001, when the movie, “The Fellowship of the Ring” came out, the studio released a “deluxe DVD” set that included a set of statues of the Argonath, the Pillars of the Kings. Firstborn was 12 at the time. We were pursuing the nine Burger King figures of the Fellowship. We bought the Argonath. (He still has them.) Two years later, after the release of “The Return of the King,” they released a deluxe DVD set for that movie that included a statue of the city of Minas Tirith. We bought it! We knew what the third statue would be, and agreed he would keep the Argonath and I would get Minas Tirith. (The second movie’s statue was of Gollum. We passed on it.)

So, since 2003, I’ve had Minas Tirith on my desk. It (and the movie version of the city) are based on Alan Lee’s LotR paintings. The detail on both statue sets is incredible. And that’s where I go back to my love of miniatures. Looking down at the Black Spire statue from Galaxy’s Edge

It’s good to know they get me. No Old Spice. No gift card. They saw this Star Wars statue and figured, this works for Dad. I’ll always be proud of that.